We’ve used scouting reports, our proprietary roto scoring method, and our Prospect of the Week lists to create our Farmhand Team of the Month for August, 2018: 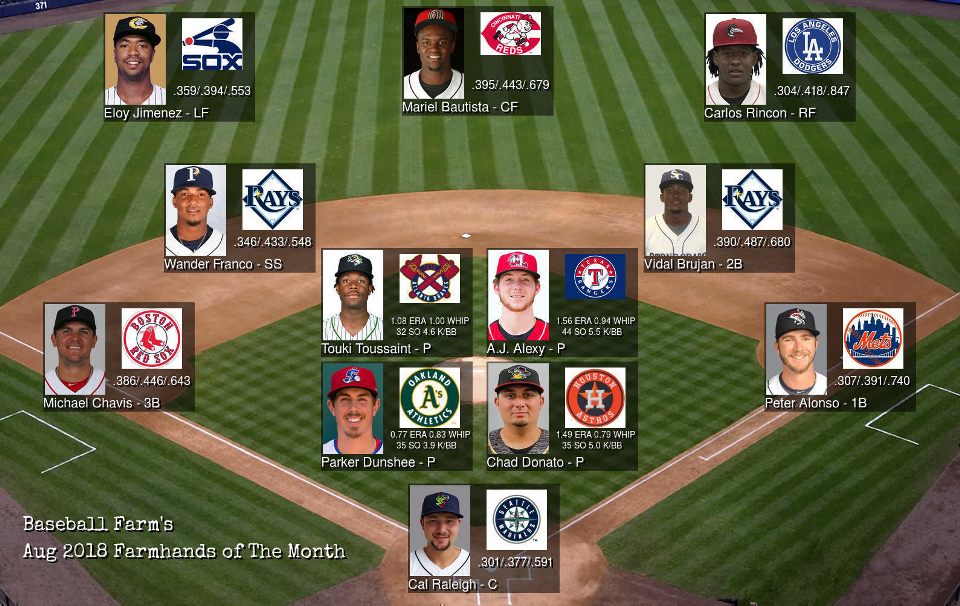 In a month when fellow FSU Seminole Catcher Buster Posey went down with a season-ending hip surgery, Cal Raleigh took up the torch. Raleigh, 21, was Seattle’s 3rd round pick in the 2018 draft. He looks to be one of the top Catching prospects in a farm system that is devoid of much high-end talent. Can he continue following in Buster’s footsteps and become an impact backstop and fantasy baseball cornerstone for the next decade?

1B – Peter Alonso
Alonso could have got pissed and folded up when he found out that the Mets were not going to promote him under any circumstance this season. Instead, he went on an end of season tear that culminated with a walkoff HR in his final game of the year. Alonso wound up tied for the MiLB lead with 36 home runs, and he’s likely a shoe-in for the 1B spot on our 2018 Farmhand Team of the Year. He slugged .740 in the month of August!

2B – Vidal Brujan
Small, powerful pivot-man who has been the subject of much prospect hype as of late, including this fine piece by our own Brenden Gorzelski. August was really the month where Brujan put all of his skills together, and he finished as the #1 overall batter for the month. The debate will rage on as to whether or not he hits for power at the MLB level. But you all might be missing the boat, as it’s his ability to get on base and his 80-grade speed that are his calling cards.

He’s been THE smoking hot prospect of 2018, and was subject of Brenden Gorzelski’s first ‘Next Phenom’ article. This month he continued smoking baseballs as a 17-year-old in tehe Appy League. The future is as bright for him as it is for anyone in baseball at the moment. Claim him if he’s still available in your shallow dynasty league somehow. Just do yourself a favor and claim the right Wander Franco if he’s still available. Don’t claim his brother Wander or his other brother Wander…

He stumbled a bit out of the block after coming back from an 80-game PED suspension, but he laid that to rest with an outstanding performance this August. His bat is for real, but there’s still a bit of a question as to where he’s going to land defensively as he’s not a strong 3B. Still, we thought he might get a shot as an expanded roster call-up with the BoSox as they push for the playoffs. Instead, it looks like the plan is to have Chavis take a shot at the AFL this Fall. 2019 ETA still very much the plan for 2014’s 1st round selection.

He’s dealt with every bullshit service time excuse that his parent organization has thrown out there this season. Rick Hahn’s newest tall-tale is that Eloy needs to improve his defense as they don’t need a DH on the South Side. 1) Daniel Palka has played 50 games in the OF for this godforsaken ballclub this summer 2) Yes they do need a DH. While the CBA has robbed us of a half-season of potential fun from baseball’s top power-hitting prospect, Eloy should be up by mid-April 2019. If he miraculously gets a full season of PAs in, he could hit 40 HRs next summer.

CF – Mariel Bautista
A 2014 J2 signing whom I had never heard of before this article, Bautista was excellent this month, finishing as our #2 overall roto hitter. Posted a .921 OPS in the Pioneer League this season.

This kid went ballistic once he hit the A-Advanced California league. Holy shit he Slugged .847 this month with 14 HR!! His OPS has nearly doubled since his promotion from the Midwest League (.689 vs. 1.246). 2015 J2 signing who is looking like he’s starting to figure it out.

We love Cool Hand Touk on this site. He was excellent again in August, with 3 of his 4 starts making our daily Dominant Starts list for AAA. He’s back up with the big club to throw that big fastball and hammer curve and try to help this young Braves squad wrap-up a playoff spot. A great bounce-back season in 2018 reminds us all to not give up on our studs.

Right-handed hurler came over to the Rangers from the Dodgers in the Yu Darvish trade. Posted 3 Dominant Starts this month and punched out batters at a ridiculous rate, with 44 Ks and a 5.5 K/BB ratio. An 11th round prep pick in the 2016 draft, Alexy is still only 20 years old. He put together a strong 20-start season this summer.

Dunshee is surging right now, grabbing headlines as one of this season’s top pitching prospects. 3 Dominant Performances in 5 starts in August has definitely helped his prospect status. He was a 7th round pick out of Wake Forest in the 2017 draft. He’s now posted a 13-6 line with a 2.33 ERA and 1.00 WHIP in 22 starts between the A+ California League and AA Texas League this season.

Donato made 5 starts this month, and each of them hit our daily Dominant Performances panel. He’s 23 and pitched in the A-Full Midwest League for the majority of the season, so we aren’t quite throwing our pom-poms in the air. But still, he’s now 6-0 with a 2.04 ERA, 0.92 WHIP, and 77:19 K:BB ratio in those 10 Midwest League starts.