Skip to content
Posted on November 4, 2018 by Phil Goyette

Baseball scouts and prospectors have focused their attention on the Arizona Fall League in recent weeks. Over on our Twitter account (@BaseballFarm), we’ve been posting daily and weekly top hitting performances so far in the AFL. Two (I think related) anecdotal trends have been popping up regarding AFL hitting performances: 1) the idea that the AFL is hitter-friendly and 2) the idea that hitters are taking a more aggressive plate approach in the AFL as opposed to the minor league regular season.

We would expect that if hitters are taking a more aggressive, free-swinging approach in the AFL, we would find lower walk rates relative to the hitter’s regular season performance. That’s not exactly what we found: 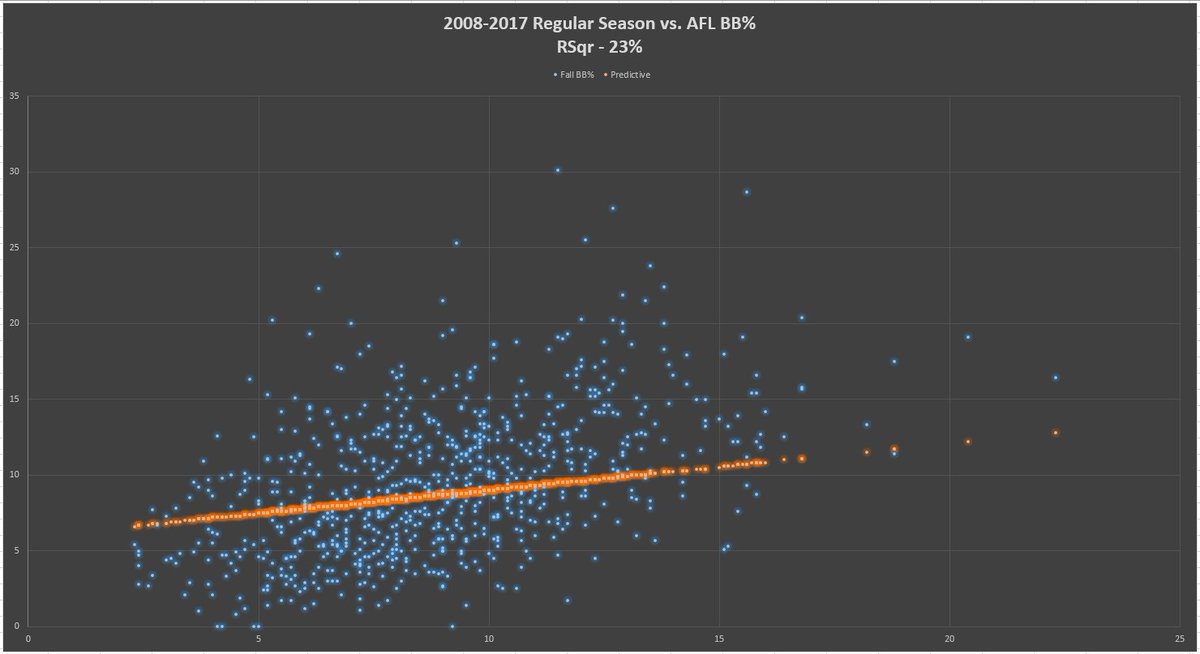 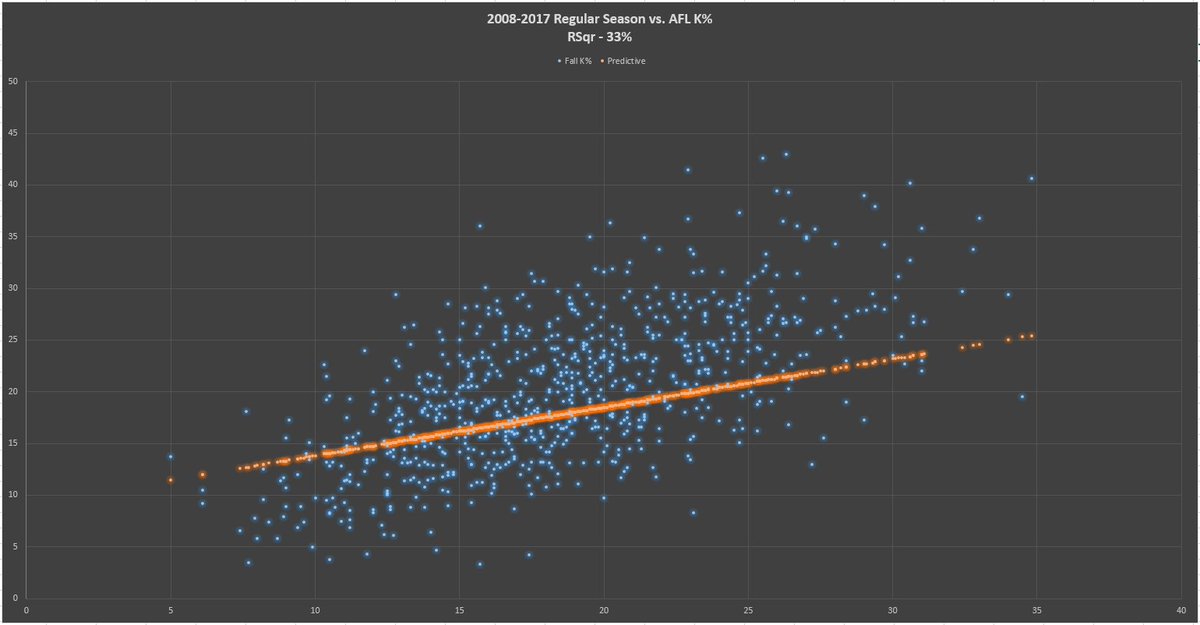 In these graphs, each blue point represents an individual player season. The vertical (y) axis shows the player’s Arizona Fall League BB% and K%. The horizontal (x) axis shows the player’s regular season BB% and K%. The orange line is a ‘best-fit’ regression line showing the relationship between the two rates. The orange line shows where we would expect every blue X,Y coordinate to land if regular season BB% or K% and AFL BB% or K% were perfectly correlated.

You can see that K-rate (33% r-squared) better correlated than BB-rate (23% r-squared) between the regular season and AFL. This tells us that a hitter is more likely to see his BB-rate change between the regular season and AFL, as opposed to his K-rate. The high correlations of both plate-approach metrics make sense. The AFL is not far removed from the player’s regular season (approximately a 1-month break) and you wouldn’t expect a player to make wholesale changes in his plate approach that short period of time.

A change in approach could help explain the difference. John Eshleman of 2080 Baseball has been scouting the 2018 AFL after spending the year scouting hundreds of players at multiple MiLB levels. He’s noted that hitters are taking a more aggressive plate approach in the AFL compared to their regular season approach.

Kim Contreras, who covers spring training, instructs, the AZL, and the AFL for several outlets, also notices that hitters take an aggressive approach to the AFL. According to Kim:

“Yes, I believe the hitters are also more aggressive. Lots of first-pitch swinging! And I say that because as I try to video a guy at the plate, I have to be set and ready before he’s announced or I could miss it.”

Kim makes another good point about aggressive approaches in the AFL: “There is also freedom afforded to the hitters and baserunners. They are much more free to try what they want when they want. Test things out that they usually couldn’t during the season.”

Another factor which might explain the change in BB% and K% between regular season ball and the AFL is the disparity between hitting and pitching quality in the AFL. Kim explains this really well:

“Pitchers, unless they spent much of the season on the DL and need to make up innings, are pretty close to being done by the time they get here. If they’ve been healthy all season, they started in February or before, and took the mound all season, maybe even the post-season. Then back out here for the extra 6 weeks when there’s a good chance this wasn’t built into their plans back in February. I know some pitching coordinators who would rather not have their healthy guys be taxed with this extra showcase season.”

However, we do need to note that at least 3 of the top young pitching prospects in the AFL are performing well this year. Forrest Whitley and J.B. Bukauskas are leading the Scottsdale staff, which is performing significantly better than the rest of the AFL. Their 2.95 ERA is far better than their next closest competitor (Mesa, 4.53), and their 1.27 WHIP is nearly 0.2 lower than Mesa’s next best 1.45. Also, Marlins farmhand Jordan Yamamoto has posted a 1.69 ERA in 16.0 innings of work over 4 starts, with a 20:10 K:BB ratio.

So the pitching is generally worse than the hitting in the AFL. With that being the case we’d expect hitters’ K% to go down because worse pitchers have worse stuff and strike out fewer batters. We’d also might expect the hitters’ BB% to go down as well, as worse pitchers are easier to hit and batters are taking advantage of that by walking less. This is kind of what we are seeing in this data. But with these findings, we can’t rule out the idea that hitters are bringing a more aggressive approach to the plate in the AFL.

Some data we’d like to see to be able to dig deeper into this is the frequency of ball-strike counts. With more aggressive hitting approaches, we’d anticipate more AFL plate appearances to end in 0-0 and 0-1 type counts in comparison to the regular season. Alas, this data isn’t publicly available anywhere, so we are working with what we’ve got.